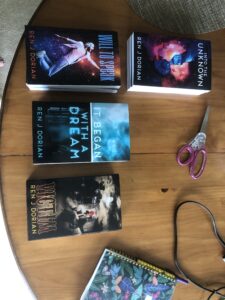 My new paperback copies arrived in the mail! I’ve been looking forward to this! The first thing I did was check for errors as I unpacked them. I found a few dinged corners, but that’s minor (and probably because the box looks like someone tried to make it into an accordion). The second thing I did was set up to make some promo images.

Right off the bat, the photo space was cat approved: 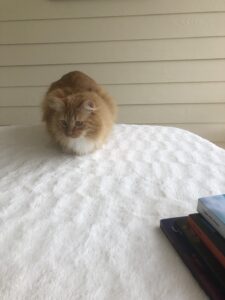 Here’s a sampling of some of the images I took: 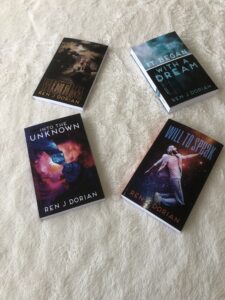 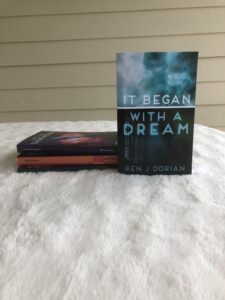 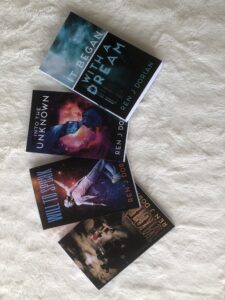 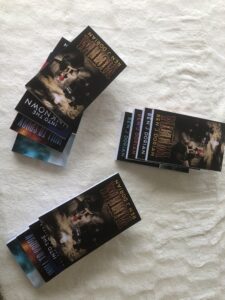 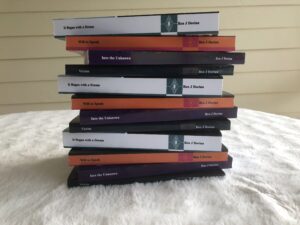 (I know photo quality isn’t great on my site right now. I still haven’t figured out how to fix that.)

Overall, I really like how the new cover designs turned out. They also transferred very well from ebook to paperback and you can still see the spine stripe in the new format. The living flower doodle I made on the spine also transferred well (and made the final cut). I was a bit apprehensive about the bleed zone around the spine, but the colors are complimentary enough that it works pretty well.

I  am still a bit unsettled about which images I should use. I have already uploaded a new banner image for my site (you can see it above). It is bittersweet since the old one is from Into the Unknown’s original cover, but the change is long overdue. I suppose I could say the same things about the new covers. I designed the old ones, but I needed to let them go. A part of me really wanted to do the old covers next to the new ones in a promo image, but I decided against it. I’ll always have a couple of the old ones around (honestly probably in a box under my bed, but they’re there).

Anyways, thanks for reading. I am glad that the new covers turned out as well as they did.

Effective June 1st, 2022. I may resume it someday, but that doesn’t look likely.

Why am I canceling it? Low engagement. I have decided to focus my efforts elsewhere. Everyone involved has already been informed. The website plugin has just been removed.

In case you've had a hard, tough, heavy week, just know that you're a fantastic, talented, beautiful human being, and that I see how hard you work and how much you care. Guess what, tomorrow is the weekend. You've totally earned it.

“I am Ren. Lord of the center. Bringer of my weird little weird. Fear me for I just got a new phone charger.”

Her Royal Majesty, Kristin I @HRM_Kristin_I

I am Kristin. Lady of the Sea. Bringer of Fire. Fear me for I don’t want to see the rest of the movie.

the piece of writing advice that changed my entire outlook on my career AND helped me be more genuinely happy for my writing friends is this:
when you feel envious of someone else’s success, ask yourself if you would trade your work for theirs