Note from the future: this post is (sort of) about [Victim’s Original Third Chapter]. You may also want to read Victim’s [afterword].

I’m in a weird position by rereleasing my books under an updated writing name. I have found that, in looking forward, I’m also looking back. Especially around Victim.

Before I continue, you’ll likely want to read this blog post: [Victim’s Stance on Guns]

I still get some frustrating feedback on that subject in Victim. Since I’m rereleasing my books under my updated writing name, now is also a good time to clarify that in the book itself. I’m not doing anything major. In fact, I counted six instances where I added a line, rewrote a line, or deleted something. For example:

“Although, perhaps, she was being a bit naïve. Maybe we both were.”

I added that to what some of my readers have called the “preachy bit” in chapter three. That bit was never intended to be preachy – it was intended to show their simplistic view of guns while also doing some world building. Admittedly, I wrote this in college. I would probably approach it differently if I wrote the book now. (Don’t know what I’m talking about? Read the above link.)

“She declared, emphasizing her strong (albeit, rather simplistic) view.”

That breaks up what was a block of dialogue text. It helps clarify their viewpoint, but I’ve improved enough as a writer to see that I should have already broken up that text. I held myself back from making too many of those sorts of updates – everyone improves, and I am not an exception. Although I did take this opportunity to clarify one other thing:

That change isn’t about gun violence. It’s about why a woman reacts so badly to Rina on the train. This was a common point of confusion amoung readers. I’m still not outlining the exact reason in the text, but now it should be clearer that Mica is not narrating every detail about her. I’ll still allow each reader to draw their own conclusion about why people see her in a particular way.

I stand by these changes. I have my reasons, and they are documented above.

(I did, admittedly, fix three typos that have been pointed out to me by readers. Whoops.) 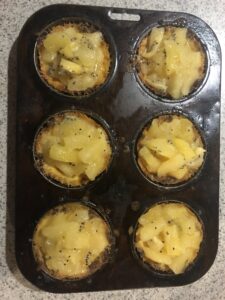 But congratulations if you got here from google! I’m an American science fiction writer who is currently backpacking in New Zealand. It’s a beautiful country and two of my roommates have brought home a lot of kiwi fruit. They just finished working at a packhouse for it, so I do mean A LOT of kiwifruit. Mostly golden.

We have three bins of it in the room while I type this. Each bin has at least three layers. So, again, A LOT of kiwifruit. This means that I decided to try something a bit different: baking kiwi pie.

But, how? That’s a good question.

I searched google and I asked around. I did get some interesting suggestions (like using it to top custard pie), but I ultimately decided to make my own recipe. It’s a combination of a gram cracker crust (tea biscuit edition), an apple juice variation of key lime pie, and cut golden kiwi fruit for the topping. I used apple since I don’t particularly like lime and I thought that it would go well with the kiwifruit.

The verdict? One of my roommates thinks it should be called a tart, I have now learned several variants for the word ‘awesome’ in Japanese, and everyone enjoyed it. I personally loved it so much I made it again. And I documented it a bit better this time:

~200 grams crumbled chocolate tea biscuits. Personally, I got the countdown choc creams and removed the chocolate cream part (since then I could nibble on that while baking). If you do what I did you’ll need two packs of them.

1 can sweetened condensed milk. I couldn’t find any, so I made my own. You can find the recipe I used [here]. One can is (I think) roughly 3/4 cup homemade.

I’ve been enjoying a very nice writing retreat. Technically I’m still doing the retreat now, so it feels a bit weird to be writing a blog post on it. But I want to process some of these thoughts during my retreat.

I’m doing my retreat in the afternoons. I currently live abroad, and international travel is restricted. In exchange for accommodation, I work an easy 1-2 hour(s) shift in the mornings, so sometimes I get some writing done beforehand. The remainder of my days (aside from basic maintenance like meal prep and the occasional social something) are being devoted to writing and editing. This retreat runs roughly from the middle of July through (at least) the end of September. Sometimes I write at the beach or the library, but I typically type in the kitchen or on the floor by my bunk.

Ultimately, most of the negatives listed are just coincidences of bad timing. The positives vastly outweigh the negatives to the point that I would like to have more writing retreats in the future.