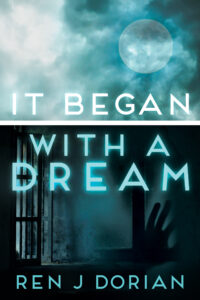 It Began with a Dream is now published! I’m glad it’s finally released. It’s currently only in ebook form, but the paperback version will be released soon. This is the first time I’ve used a cover artist, so there are additional steps I have to go through for the paperback version. Historically, November means a noticeable dip in horror sales, so I made the decision to release the ebook version first. I discussed my journey with the cover in It Began with a Dream’s [cover reveal] post.

This is the part of the release post where I’m supposed to hype up the book and give you an irresistible offer. I do not find marketing intuitive at all, and I don’t mind admitting that. So, I will leave you with the summary. If my book interests you at all, please check it out. I’ll try to get some copies in the local libraries, but I no longer live in Virginia, so . . . . .

Goren would be perfectly satisfied living life off his father’s savings, content with no real aims or goals. However, it seems that life has other plans for him when, one night, he dreams of committing a grotesque murder as a blue-grey monster. His fractured brain puts him in denial. Then a friend tells him some horrible news: there’s been a murder. It’s a horrifying scene that’s put the city on edge. When Goren immediately starts recognizing the details, he jumps into panic mode. What happened to that monster? And what about that dream?

Oh, yeah, I’ll also give you this: [It Began with a Dream on Amazon]

(To those of you who question my post dates: Amazon emailed me on Wednesday to inform me that my ebook was officially published on their site on Sunday. I submitted it Saturday, so I think this is the fastest any of my books have made it through Amazon’s approval algorithm. I had a very long day yesterday and was so drained that my tweet got out, but my official website post did not. Today is Thursday, so I made this post this morning.)

i'm going to try to do this gently because listen everything is f*cked and ppl don't always think before acting, but i really need to say something about pen names, and what to do if you find out you know the person behind one:

I almost didn’t get that one.

I did ballet from ~5-8 plus some tap and years of jazz. I actually did jazz in college again after taking some time off. Yes, this hit hard. I still have issues with my knees / hip flexors and am STILL correcting muscle imbalances.

It's a good cis opinion.