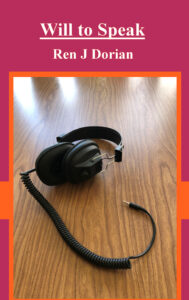 GT isn’t content with the hand he’s been dealt in life. But he has a dream: to hear his own voice on the radio. Things aren’t quite going his way when he finds himself on a long and lonely walk. It turns out that a mysterious stranger has plans for him – he wants GT to replace him in the future. Once he is whisked away, trapped inside a rocketing time machine, GT must learn to cope with the extreme uncertainty. Could this be a positive twist of fate? He gets presented with a decimated humanity and a beautiful Emalyn. (TW: panic attacks, verbal abuse)

A frustrated teen gets kidnapped and sent to a dystopian future where they struggle to adapt and find their voice.

So, where to start with this one? Well, it was originally a short story I wrote for creative writing at college. Although that was about an ungendered character named Alex who entered a fantastical artificial future instead of a dystopian one. They were still taken against their will and mistaken for the chosen one. Later, I decided to rewrite it and expand on the story for a camp NaNo project. Then it was G and Natsume (two mains), but I kind of lost Natsume later. Oops. He was accidentally written out since I wanted to focus in on G. The project got set to the side, until I returned to it more recently. Now it’s just GT, but I kept most of the same side characters including Gen, Lily, and Matteo. You can see pieces of the rewriting process scattered through some of my Thursday updates if you’re interested. Yes, most of what I’m doing with it now is still a rewrite off the camp NaNo version.

That original short story is the first time I wrote an ungendered character. I wasn’t even aware of non-binary or agender as an option yet. It just happens that there was no good way to introduce the character’s gender early in the story (because of limited interactions with other characters and a 1st person perspective). I didn’t want to make the type of later reveal that frustrates me. So, I made a conscious effort not to gender the character and to mix gendered language. I did not even assign a gender to Alex since I didn’t want it to clutter my understanding of the character. GT, however, is canonically non-binary, unlike Alex who was just ungendered. Someday I’ll write a post about writing ungendered characters and link it here. Will to Speak is its own story, but it did grow out of that original one. If I can dig up the original I’ll add it to the extras page someday.

As for the title, I love the ambiguity of the term will. It also has a fascinating etymology. For example, in Victorian England, will was one of the many words for penis. No, that’s not the way I’m using it in the title. Yes, I know there’s a dominant interpretation in our modern era. But you’ll notice some historically-displaced phrases that resurface in the language of the book (specifically with Matteo and Emalyn in time point three).

GT’s song? Incubus Pardon Me [can be found on youtube here]