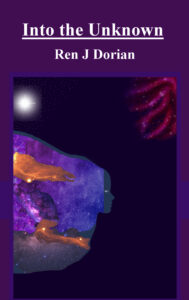 It’s over a hundred and fifty years in the future. The Pyrrh have taken over, forcing the remaining descendants of humanity to either cower in shelters or fend for themselves in the outer zones. Three friends enter the scene, fleeing for their lives. They encounter a supposed scientist, a man who has possession of a mysterious time machine. When Aiden swipes the key, new opportunities arise. Perhaps the best escape of all is to the past? But what consequences await? (TW: implied intent of suicide among several unnamed side characters)

Three friends attempt to escape to the past, only to encounter disastrous consequences.

This work was one of my larger side projects when I moved it up to my secondary main project. I seemed to be going through a horror phase (which is perfectly fine, I just haven’t done much with fantasy for a while). The original outline was sci-fi horror, but I decided to turn it into just a sci-fi instead. The progress on this work did overtake my progress on IBwaD (this sounds familiar since that happened with [Victim]), so I have shifted it up to my main project. ItU takes place in the Balance of Souls, just like Victim, except in different times in that setting. While Victim takes place mid-way through their timeline, ItU takes place in the late and early points in the setting (See [The Balance of Souls] for clarification).

This project was originally a camp NaNo project (camp NaNoWriMo is essentially off-season NaNoWriMo, [link]). However, I was very sick that summer due to a negative reaction to a medication essentially wrecked my immune system for a few months, so I did not get as far as I wanted to with the original draft. Due to trying to convince myself to write at a very early (or late, depending on how to look at it) hour, with an especially painful stomach bug, I accidentally scared myself. Out of stubbornness, I rewrote the later middle section, but kept the original ending (mostly, since I added the Lilchtee candies). After I turned it from a sci-fi horror (via Victim’s S-H distinction) into just a regular sci-fi, I rewrote basically all but the last roughly four lines.

I’ve chosen a song for the book overall, but it might be a bit of an odd choice. It’s actually a country song, and I like the energy behind it. The lyrics, too, are fitting. “Better hold on tight / Before you know it’s gone / And live like tomorrow never comes” It’s especially fitting for when they steal the time machine and set off on their adventure. The song is Zac Brown Band’s Tomorrow Never Comes. You can find it on youtube [here].